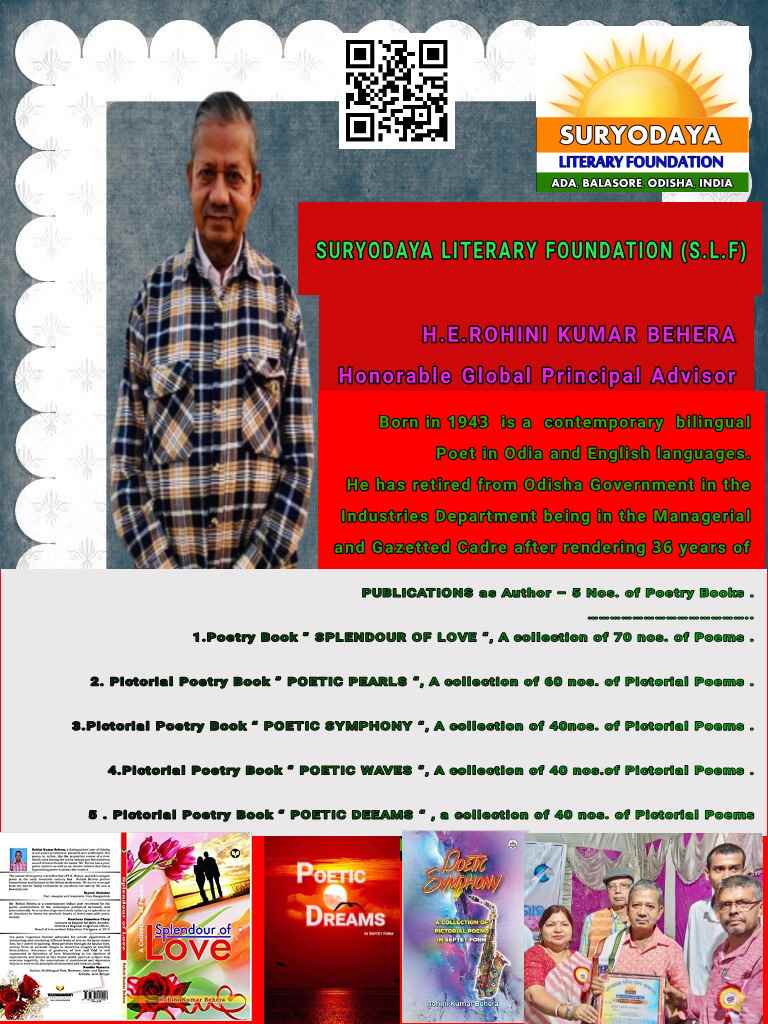 Rohini Kumar Behera born in 1943 is a contemporary bilingual Poet in Odia and English languages . He has retired from Odisha Government Services in the Industries Department being in the Administrative and Gazetted Cadre Officer after rendering 36 years of bonafide continuous Service .

His poems have been published in Odia Magazines and in English Poetry Anthologies e.g., ” My Sweetest Love ” compiled by Chita Lele , ” Spring : The Season of Love ” by Prof. Rajdeep Chowdhury , ” Symphony of Souls ” by Dr. Manthena Damodara Chary , ” Poetic Rainbow ” by Vishwabharati Research Centre , ” Symphony Of Peace ” by Prof . P. Gopichand / Prof. P. Nagasuseela, ‘ Ambrosia ‘by Telengana Poets Forum and ” LOVE AT FIRST SIGHT ” by Rajdeep Chowdhury/ Monika Arora, Complexion Based Discriminations -A Social Injustice by Dr. Deen Dayal , Symphony of Peace in World Poetry on Let There Be Peace A paradigm for Peace Strategies , Heartistry by Poetic Group of POEMarrium , Vasudha – 2 by Gayatri Mavuru , Muse by Gautam Karmakar , “ TRANQUIL MUSE “ by P. Gopichand and P. Nagasuseela , Poem ‘ DALIT ‘ in the Journal of The Literati Cosmos Society (Regd. ), “ MEDLEY of MELODIES “ by PoeMarium of Dr. N K Sharma , “ PETALS OF PEACE “ by Manthena Damodara Chary , “ A Handful of Memories “ by Rock Pebbles Publications, “ Traumas on Widows “ by Literati Council , India , “ Peace For Mankind “ by Rock Pebbles 2018 , “ Love Sublime “ in Cherry Blossoms by Geetanshi Muttreja , “ Slavery And Child Labour “ in Nostalgia by Khushi Verma , “ Glow Of Peace “ in Voices Of Humanity by Manthena Damodara Chary , “ My Traumatic Days “ in Traumas On Widows , “ My Mourning Days “ in Holistic Healings Of Widows and “ Intense Dream “ in Global Literati Insights , all 3 Poems by Literati Council , India and Articles in various Books and Journals . 3 Poems – “ King Of Seasons “ , Splendour Of Nature “ and “Inspirational Tranquility “in OPA Archive Anthology “Spirit Of Nature . Poem ‘ Autistic ‘ in International Anthology of Poems on Autism . He contributed and Participated through his Article and Pictorial Poem in a rare consolidated Book wherein both Articles of Research oriented Paper and Pictorial Anthology have been consolidated which is first of its kind in the World . His Poem has been Published in ‘ SIPAY ‘ Magazine , in the Republic of Seychelles.

2. Received the most prestigious WORLD EPITIOME OF HUMANITY ” Award from the World Institute For Peace ( WIP ) , Nigeria for promoting PEACE through Global Education Reform .

3. The World Institute For Peace , Nigeria , Africa has Awarded him by Appointing him as ” AMBASSADOR OF PEACE ” for Odisha State of India

4.He was Awarded ” OUT STANDING PERFORMER ” BY The Spectrum Publication House , UK in January , 2017 .

6.Received ” WORLD ICON OF PEACE ” Award from The World Institute For Peace(WIP) , Nigeria , Africa for his contributions in the field of Poetry and Literature .

7.He has been Appointed as ” AMBASSADOR AT LARGE ” of India Branch , Asia Continent by World Institute For PEACE , Nigeria , Africa .

8.He is Felicitated and Awarded with ” KONARK ODISHA SAMMAN ” in 2017 by KONARK ODISHA PARIWAR for his services and contribution in Poetry and Literature sectors in 2017 at Bhubaneswar, India .

9.He has been Appointed as ” PEACE AMBASSADOR & POETRY , Literature MOTIVATOR ” by Human Rights Council & Crime Intelligence Force for Younger Generation and Universiity Students .

.10. He is Appointed as ” AMBASSADOR AT LARGE ” , India Branch by Mr. Ismail Akinlade Yusuf , Founder and C.E.O., Focus Media , Nigeria for his impact on Humanity through his creativity in 2018
.
11.He has received ” THE LIFE TIME ACHIEVEMENT AWARD ” from The Literati Cosmos Society , Mathura (UP) , India in 2018 .

12.He is bestowed with ” SAHITYA SHIROMANI AWARD ” by the Literati Cosmos Society , Mathura UP , India in 2018 .

13.His Majesty George Windsor Appointed him as CHIEF LORD of Micronation Britannia Repubic .

14.South African Eagles College has declared him as ” 2018 AMBASSADOR and Award Of PEACE ” .

16.He has been awarded of Excellence for Group Administration in PoeMarium Group .

17. He received Commendations Award for Best Motivator of Poetry in Telengana Poets forum .

20.He has been Awarded and Felicitated as ” OPULENT OPTIMIST ” in Hyderabad Poetry Conference by Dr. Manthena Damodara Chary , Founder & C”E.O. , Telengana Poetry Forum , in September , 2018 .

21.He is an Official Member of World Nations Writers’ Union , Kazhakhstan .

23.The Motivational Strips Academy of Literary Excellence & Wisdom Awarded him ” GOLDEN. BADGE ” for the Golden Words from his Pen in November,2018 .

24 . Arpita Foundation , Mathura , India Awarded him ” BHARAT RATNA SHREE
ATAL BIHARI VAJPAYEE AWARD ” in recognition of his dedication to
Society through his work as well known Poet in December, 2018 in an
International Women Empowerment Summit – 2018 at Vrindaban .

25 . The International Higher Academic Council of English Literature ( IHACEL )
Awarded him Certificate of Excellence as ” WORLD ICON OF LITERATURE
for his recognised Merit in the Literary and Cultural Fields as Poet ,
Researcher and Global Peace Activist in December , 2018 .

26 . He was Elected and Awarded the Post of Dy. Secretary General of
World Union of Poets , Headquarters at Italy .

29 . He is Conferred with “ GLOBAL DOVES OF PEACE “ Award in Tribute to
Mahatma Gandhi & Nelson Mandela by Founder/Chancellor Shiju H.
Pallithazeth of Motivational Strips Academy in 2019 .

30. He is Conferred a Global Award of Excellence “ LIVING LEGEND OF THE 21st
CENTURY “ by International Higher Academic Council of English Literature.

33. He is bestowed with “ HONOURED POETS OF INDIA “by LLSF, accredited by the Government of Republic of Seychelles for his contribution to World Poetry with Excellence on 73rd Indian Independence Day of India .

35. He is conferred with “ BEST OF 2019 AWARD “ from South African Poetic Police Philanthropic Services (RSA ) .

36. He is bestowed with “ LIFETIME ACHIEVEMENT AWARD “ from Arpita Foundation , Mathura in 2020 .

39. He is Appointed as the CHIEF ADVISOR of Suryodaya Literary Foundation, Odisha , which is functioning as an International Literary Organisation .
Awarded with SLF Biswakabi Rabindra Nath Smruti Samman-2020

40. He was the Guest Of Honour and Chief Speaker on PEACE FOUNDATION in Russia India Cultural Exchange (RICE) Programme in 2019 .

41. His Poems have been translated into Urdu , Malayalam , Nagamese , Albanian , German, French and Kazakhstan languages from time to time .

42. He is Awarded with many Platinum , Gold , Silver Medals , Architect of Artistry Of Diction and Icons of Innovative Ideas Awards on various Categories in different sites from time to time .

43.He has attended many National and International Literary Festivals and Conferences as Organiser , Office-bearer and Member .

44. He is committed to motivate the budding writers and poets towards creativity
and guide them to participate in the field of Literature through Writing
Contests , Books and Poetry Anthologies in Naional and International levels 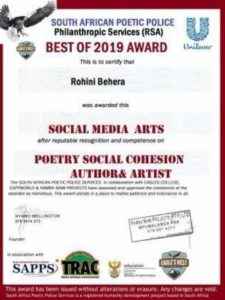 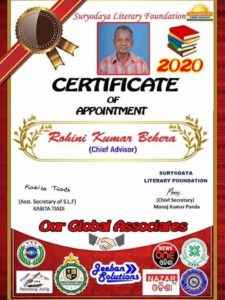 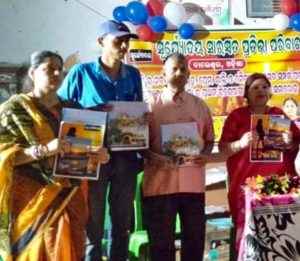 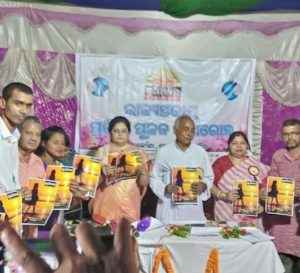 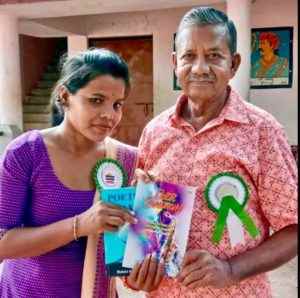 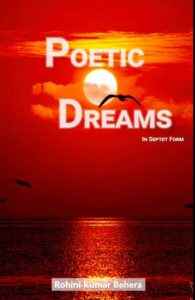 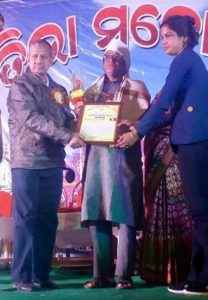 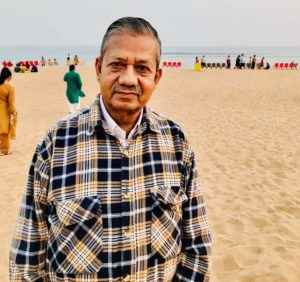 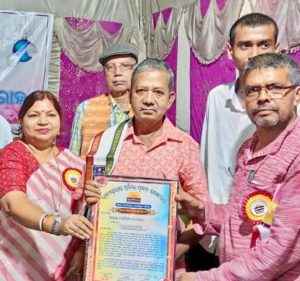 He is committed to work for World Peace , Love and Humanity .
Long Live Creativity ………..