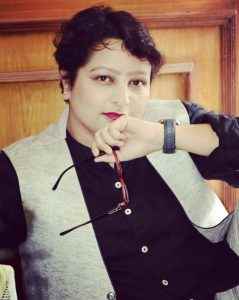 Dr. Megha Bharati ‘Meghall’, better known as the “Queen of Kumaun”,is a Singer, Lyricist, Composer, Author, Poet, Professor, Critic and a Social Activist.
Creating history as the very First Woman Lyricist and Singer from Uttarakhand, her songs are a craze in countries other than India too.
And as an Author her books have hailed a (5) Five Star ratings in the US.

With distinct Books to her credit, Dr. Meghall is also active as an Editor, Referee, Critic, Panel Member, Author, Columnist and Poet for different National and International Journals, Magazines and Books, working simultaneously in distinct languages such as English, Hindi, Urdu and Kumaoni.

She earned her Doctorate in English Literature and also started teaching as a Professor at the University Campus. Also participating actively in several National and International Conferences as a Scholar & Chairperson, she has several Research Papers & Article’s to her credit.
As a Singer, Lyricist,Composer, Actor, Writer & Director many of her Films and Albums and have been released from companies such as T-Series. In her very first film the songs written and composed by her were sung by Hindi Playback Singer Sadhana Sargam and gathered immense appreciation at the German Film Festival too. She also bagged the Best Lyricist Award for these songs.

Dr. Meghall has been working in the field of art, culture and literature for the past many years.
She got her first break to write Songs for a feature film when she was just a school going girl. And her first Book came out when she was still a university student.
She has proven her strong potential in both the fields equally with her excellence and quality of work.
She has been Honoured with several Awards,Recognitions and Titles for her contribution to the respective fields along with her Social Works, few being – “The Gazal Shahzadi” ; “The Youth Icon”; “Queen of Kumaun”; “Global Role Model”; ”Sarvashrestha Geetkar Award”; “Literary Excellence Award”; ”Urdu Journalists & Writer’s Commitee” Award; “Shree Samman”; “Indian Medical Association”; “Sahitya Pratibha Samman”; “Naari Shakti Samman” ; ”Hindi Kavya Ratna”; ”Sri Atal Bihari Bajpayee Achievers Award” at International Literature Festival and many more.
Recently she was Honoured by the Cabinet Minister, Uttarakhand, for the School Anthem she wrote and composed for a government girls school.
Also honoured by the Cabinet Minister
Mumbai, Maharashtra for her contributions to the fields of literature, film industry & her social works.

Besides being a recognized Artist and Author she is also an exuberant Social Activist. Born and brought up at Nainital, Uttarakhand, Dr. Meghall also runs a Production House with several branches. The Youth along with several Women are educated and trained here, not only to earn a livelihood but for becoming people with substance.

An awards winning lyricist and composer, singer and poet, author, critic and actor, writer and director and a brilliant academic, and also an in social activist- there’s nothing she chose to do and did not reach the top. A perfect representative of the Youth, she is definitely an inspiration to many young woman.

She can be contacted at meghabharati777@yahoo.in

* To know more about her work, she can be followed on her Official Fan Page
https://www.facebook.com/meghabharati/
And also on Instagram, Twitter and You tube.
https://www.youtube.com/user/meghabharati/777

https://www.hungama.com/artist/megha-bharti/songs/11498/
Or
You May Simply Google the name.