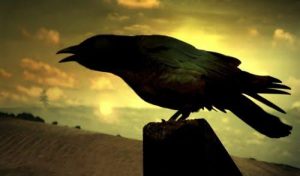 It is moth hour in the morning. A group of crow perched on the straw thatched roof of Linga Baya’s cottage , cawing ceaselessly to arouse him from sleep as an awakening clock ringing on the top of hut. Hearing the signal sound of early birds he wakes up and rushes to the kitchen to collect a handful of corn to pile on the verhnda for feeding them with pleasure. Then he calls out loudly. his daughters by name
” Manju, Ranju, Sanju, , get up soon it is already late. I am going to take bath. Close the door behind” 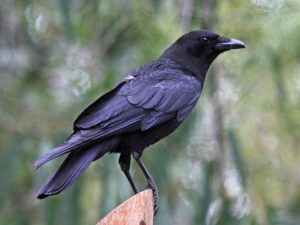 After ordering the menu for his traditional breakfast he proceeds towards the pond situated near Siva temple. He passes through the streets holding a lota in his left hand wearing sacred thread around his auricle and mashing a soaked datun between his teeth..

Here goes the daily routine life of none other than Late Lingaraj Tripathy who lived next door to me in the village where I lived during my childhood. days.
He was popularly known as “early morning crow” among the people around the village where he lived and grew up during his life time.. His daily activities start from very early in the morning as he rises from his bed before his village mates get up to see the first ray of the rising Sun . He wakes up early, plucks the flowers before dawn very early round the year under heavy rain or bone chilling winter, takes his bath early in the Anandeswar temple pond before others do and he has his sacred look and worship of the deity before others have got chance to do so.. After performing necessary religious rituals he comes out of the temple preceinct with his mouth full of articulation of hymns dedicated to different Hindu Gods and Goddesses chanting flawlessly while roaming round the village pouring sanctity to its air and soil. After accomplishing this rask he moves homeward to prepare himself for outing for his humble vocation of begging. In the mean time his daughters make ready his daily breakfast to be served with previous night’s left over boiled rice and malt accompined by raw chilli and salt to his taste. After gobbling the bteakfast hurriedly , clad in beggar’s wearing he sets out his journey in search of donors who can donate him in form of case or kind through which he can fill his family’s belly besetting any problem on his mission . He extends his hand before anybody known or unknown whomsever he or she may be, unhesitatingly and without any sign of shyness. Even he would not have hesitated to beg from his own village people if they have come across him on his way. The early morning crow had a unique way of retreating to his house in the evening after.

finishing his day long journey in begging. He had a habit of returning home like birds flying cheerfully chirping towards nests to beguile their fatigues after day long venture of living on preying . Although he was not able to fly in the space he was pacing towards his home on foot leaving incessantly breaking wind behind him as an old modelled lorry lumberiing on the road emitting the unburnt fuel with smoke through its silencer. His daughters Sanju, Manju and Ranju were waiting for his safe return on whom the entire family depand his earning as he was the sole male member and lone income holder of the family. Once in a year he makes a begging expedition to the undivided Koraput district for a couple of months where he is most loved by his obedient disciples. During his long absence the poor brahmin didn’t have to bother about the safety of his daughters as God had intentionally made them not so much beautiful to attract the attention of the lechers .Instead they developed the motherly qualities in them by doing house hold chores from the early childhood in absence of their mother who had left them for her heavenly abode much earlier.

Lingaraj was sentimental and prestige conscious person to the core of his heart. He didn’t let leave any person unpunished if anyone tried to tease him with unhealthy or unpleasant remarks on his personal or professional life. To him receiving alms from others was neither a sin nor a crime for a pious brahmin rather he felt pride in redeeming the life of others receiving donation as his fees for the service he rendered to the needy.
I remeber an incident that took place between he and me when I was reading standard five. One day I was returning towards home with my class mate Santosh after school hour over. Santosh’s nature was different to me in terms of attitude and behaviour. I was bearing sullen countenance whereas he was a little bit naughty and pugnacious to his merit or demerit I failed to know until the end of our friendship that separated us from each other in later years. All of a sudden we noticed Lingaraj was collecting fallen ripe paddy grain from a distant field alone without noticing any passers by that came across him on their way. Seeing him from distance an evil thought entered into the mind of my childhood friend Santosh. He wanted to take advantage of the situation .and tried to ridicule him by passing sarcastic comments on him. He began to tease him at the top of his voice saying like this.
“Look Here eats corn the Early Morning Crow, Caw! Caw! Caw!. He is rising early in the morning Caw! Caw! Caw”. It is time to retire to his nest, caw! caw! caw. ”

The comment pounded against his ear drum like clanging of metal bell and suddenly he stood upright to advance towards the way where the sound was coming from. He caught sight of us
through his eagle eye and galloped like a bewildered horse to punish the culprit who dared to hurt his sentiment. Sensing the imminent danger and untoward reaction from the so called “early morning crow” Santosh took to his heel from the spot leaving me behind to suffer for his action that inflicted insult on him. As I was innocent I did not move an inch from the place out of over confidence. In the mean time Lingaraj attacked me behind ferociously with double energy. He held my right wrist firmly and squeezed it like sugarcane crushing for juice. Then he made a lethal blow on my face with his tightened fist that punched fair and square in my chin. Instead of Santosh I became the victim of his anger. The blow which came like bolt out of blue made me fall down to groan in pain.
Except under unavoidable situation like this he was humble and honest to his character. Never did he cheat anybody in his life for his living. He detested the people leading vainglorious life snatching away others right and property. He commented those people satirically if not directly, attacking their follies and foibles. A reflection of an incident confirmed my conception on him that he was outspoken without fear. In a summer afternoon his neighbour Ramakanta Mishra, a fair complexioned, Royal looking, Rangoon returnee to his pride was relaxing on an armchair in Mandap in front of his house chewing fragrant betel leave in his mouth making the lips more rosy. He had been in this habit from the very childhood.Seeing him from distance Lingaraj came nearer and praised him with humourous way
“What is the matter? You are looking smart and handsome today. Moreover the betel smells sweet and your lip looks red. Ha, ha, ha”.
Hearing words from Lingaraj, Mishra Babu got infuriated and replied angrily “You insane beggar, how dare you utter like this? Have you not seen me before? I have been always happy and handsome. Get out of my sight”. Rebuking him Mishra Babu flung his walking stick over him .Lingaraj ran away from the spot to save himself from the attack. Had he not escaped timely the walking stick would have hit to his head and inflicted sever wound on him. To his good luck he got a providential escape from an inevitable serious injury.

Lingaraj was leading a happy life with his daughters. He did not underestimate himself for his profession. Though he was living on receiving alms from others he was living like king in his own realm. Never did in his life he try to cheat others for his profit or pleasure. From cradle to grave he lived as cheerful as bird. On the day of the harvest festival when the villagers were rejoicing in taking new food items for the first time in the new year Lingaraj took his last breath vanishing from our sight forever. A miracle happened on that auspicious day. Like other day Lingaraj awoke early in the morning to enjoy the occasion as a food lover and voracious eater. After doing necessary spiritual rituals at home he went to the village temple pond with ritualistic copper spoon in his hand to pay offering to his late forefathers and gods as per established tradition of the Hindu culture. In the mean time his daughters were preparing different food items for them to celebrate the food ceremony with true spirit without compromising to anything. The meals got ready. The daughters were eagerly waiting for the arrival of their father. But the father didn’t turn out in time. Hours after hours passed still their father didn’t appear as they anticipated. They became worried and came out of their house to seek somebody’s help to find out their father. The villagers ransacked over every nook and corner of the village but couldn’t trace him out anywhere. The matter became a big issue of the day. The villagers from different age group tried their level best to help the family in distress applying their ideas and intelligence. At last a young man from our village serving in the police force came to trace the whereabouts of Lingaraj with the help of clue collected from the immediate surrounding. He noticed the petals of flowers and sesame seeds used for offering , floating on the surface of the pond. Suddenly his eyes fell upon a shinning object floating near the centre pole of the pool. It was copper spoon used for rituals. Seeing the environmental evidences at hand he suspected that Lingaraj must have drowned in the pond while making religious offerings. His legs might have slipped in the mossy rock into the watery pond. Thinking this he dipped into the bottom of the pond to trace him out in the pond. After covering the distance of ten yard radius his leg touched a fleshy object which he guessed to be a body of man or animal. He bent down in the water to touch the body with his hand. Yes it was body of a human being trapped under a heavy piece of slab not enabling the body to rise up to the surface of water to be appeared before the eyes of people. At last the young man rescued the dead body of Lingaraj from the pond. The news spread like a wild fire and people from neighbouring villages assembled in large number to pay homage to the departed soul out of reverence. They marched towards the funeral ground in procession for the cremation of dead body as a mark of love and respect to the deceased extending all types of help in form of case or kind. Here ends the glorious life of the “early morning crow” who created a blank space uncertain to be filled up in our life time.

*THE STORY OF AN UNSUNG HERO–Dr. Santanu Kumar Dash*